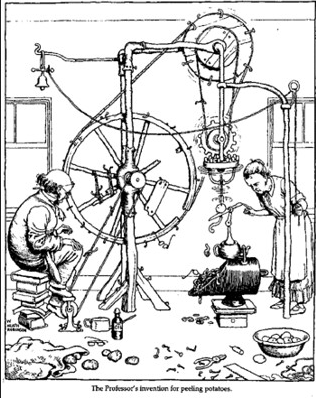 Illustration of Professor Branestawm by William Heath Robinson, (who was my great uncle)

The thing is I like inventing things, I always have and I still do. This is not a boast, and I do not claim to be good at it. During my working career some of my inventions got patents and a few generated useful intellectual property. Others are a bit ludicrous. Now it is just fun.

My inventions are in a great variety of subject areas for which I have rather variable degrees of qualifications. (I have the impression that this is not that unusual.)
This site is itself a sort of invention. It is not a chat site, I am still busy working on it and do not want to be distracted by trivial interruptions.

I have found in the past that it can be very useful to put an idea into words to a receptive listener, so you have already been useful by being part of an invisable audience but, if you want to comment, bear in mind that the process of invention requires a degree of suspension of judgement, so I am not just not interested in simple opinions, particularly if the site is found awesome. If you find anything laughable, remember that I may be laughing with you.

I am not interested in your or my recognition as such, so please confine any comments to things that are relevant and useful.

If you spot an error then I would definitly like to know, particularly if you can quote references.

If you have had the same idea, congratulations, I would find that encouraging as it supports the view that the idea is a good one. If given a simple link to a clear discription, I might give it a mention but I do not want to spend effort working things out. I am not now interested in claiming intellectual property rights, which means that any novel ideas originated from this site may be freely exploited. However I reserve the right to be recognised as the author.

The some active topics are: