My first encounter with the Microwriter, some time in the seventies, was the passive keypad, I think called the Quinkey. It plugged into the back of the BBC Computer. I borrowed one from a colleague at work, recognised the potential, but did not learn to use it. (He wanted it back!)

The next encounter was with the MicroWriter:

The display is an 16 character LCD so a bit limited for composing any extensive bits of text. I did learn the key codes but did not use it very much.

Next was the first Cy-Key: 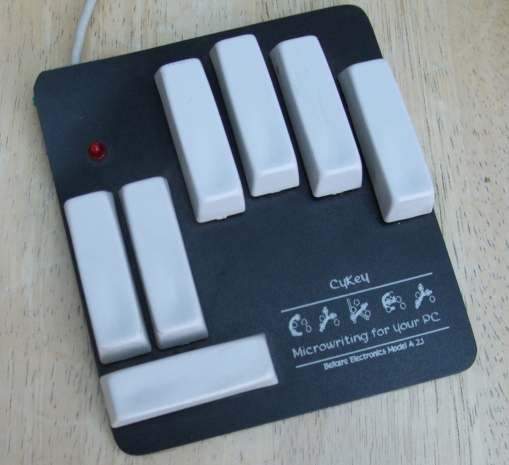 This was just a passive key pad and plugged into the pre-usb key socket. I used it extensively for several years until the keys wore out.

After this was the Agenda:

This was a very sophisticated device. It was an organiser that was competitive with the Psion (market leader at the time). The keys included a set of MicroWriter keys as well as a set of alphanumeric. I tried to use some of the organising functions, calender, contact list, and notepad. It was obvious that these organiser functions worked but I found it difficult to persist. (The fault is with me rather than the machine. I am by nature not very good at being organised).

However the keys are membrane switches with minimal travel. I did not get on with this device for text entry.

By this time the earlier Cy-Key was no longer available and had be replaced by a slimmer version: 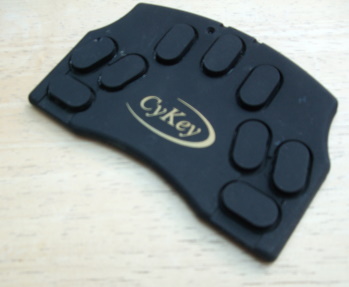 This looks much better designed, neater, more portable, and more versatile in that it can be used left or right handed. But it did not work for me. The main problem again is that it has membrane type key switches which do not have the travel or feel of a proper key-switch. Also, both with this device and the Agenda, the demands on the thumb are, in my view, unreasonable.

After this historical phase of this Writer project I started to experiment using some nice proper key switches that I had collected form a dismantled keyboard and the electronics from the later Cy-Key.

I set about building a keypad using some proper key-switches harvested for a defunct keyboard that I had squirrelled away some time ago.

which was followed by keypad(2)

This was integrated  with a trackball into a combined Writing Desk.

I am carrying on from here with further development of this writing desk.